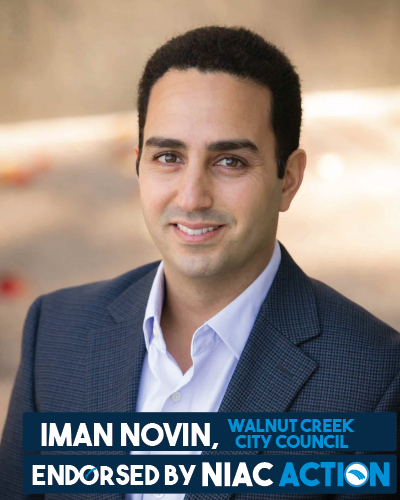 Vote for Novin for Walnut Creek! Click Here to Find Your Polling Location NIAC Action is proud to endorse Iman Novin in his campaign for Walnut Creek City Council. Novin is an active member of the Iranian-American community, previously serving as President of the Persian Club at UC San Diego and participating in several Iranian-American community organizations including NIAC. Novin is running for office to “make a positive difference” in the community he lives in and loves.

Novin has significant experience in Walnut Creek, including by serving two terms on the Walnut Creek Planning Commission, Board of Directors for the Walnut Creek Chamber of Commerce and Board of Directors of the Trinity Center, a local non-profit focused on ending homelessness. As an Affordable Housing Developer, Novin has helped build “over 1,500 units of housing for lower income families, teachers, veterans and seniors throughout the Bay Area.”

Novin has concrete plans to build out his campaign with mailers, yard signs, digital media and social media. However, he needs the support of the Iranian-American community to help make a difference for Walnut Creek.

Vote for Novin for Walnut Creek! Click Here to Find Your Polling Location