ANNOUNCING OUR FIRST ROUND OF 2022 ENDORSEMENTS

The 2022 Midterm Elections are a huge tipping point for our democracy. With more Iranian Americans and allies of the community stepping up to run for office, we have a crucial opportunity to make our voices heard at the ballot box this year.

That’s why we are excited to announce NIAC Action’s first round of 2022 endorsements!

We have identified 13 champions of our community- incumbent members of Congress who have worked to prevent war, repeal the Muslim Ban, and return to the JCPOA, and Iranian Americans and allies who are stepping up to run for all levels of office. With your support, we can continue fighting for peace and diplomacy, equitable immigration, and civil rights for all Americans.

Don’t see your Member of Congress on this list? Check out our 2022 Congressional Scorecard to see how they rank on peace and diplomacy, equitable immigration, and civil rights for all Americans. 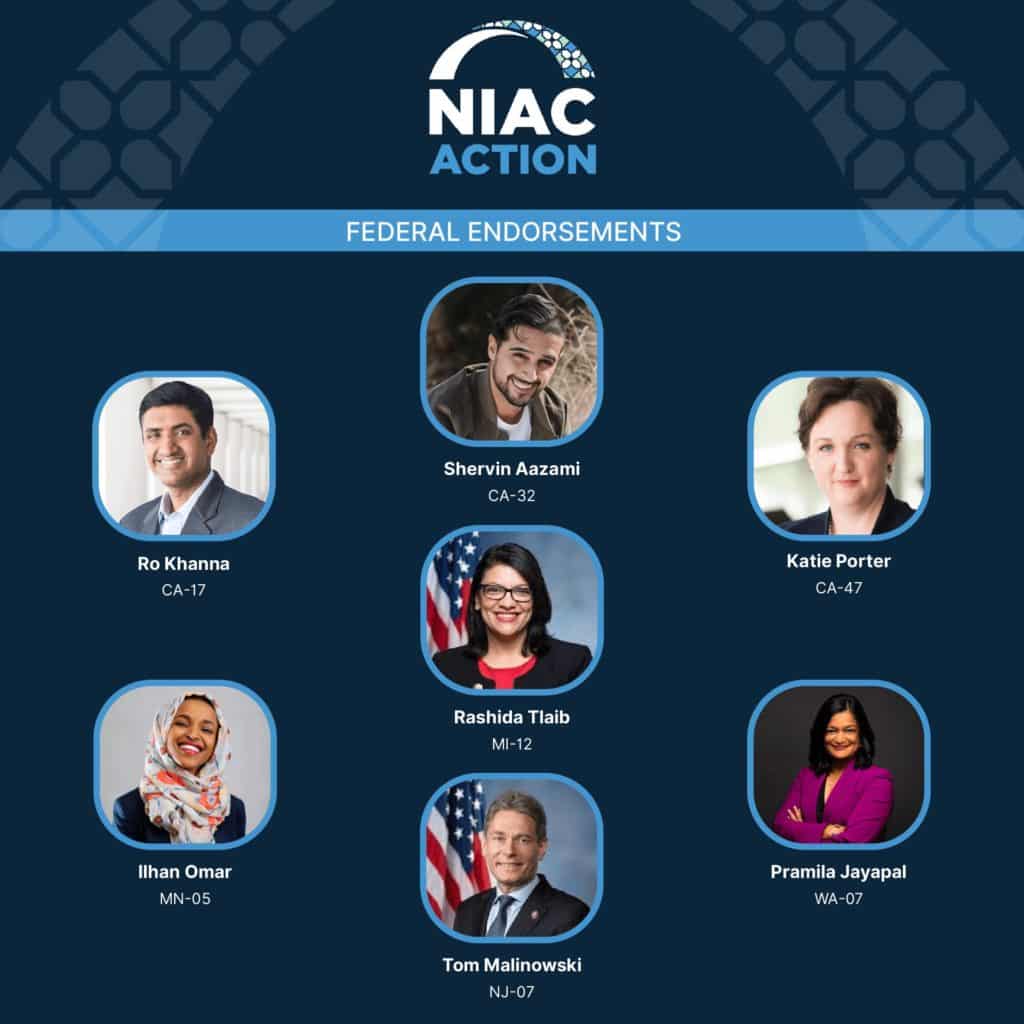 Congressman Ro Khanna (CA-17)
NIAC Action is proud to once again endorse Congressman Ro Khanna. He is a leading advocate for anti-war U.S. foreign policy– a value that is clearly in-line with NIAC Action’s priorities. Rep. Khanna champions efforts to end wars in the Middle East, and stop unconditional U.S. support for inhumane policies and actors across the region. We are grateful for his tireless work to prevent war with Iran and return to the JCPOA.

Shervin Aazami (CA-32)
NIAC Action is excited to endorse first-time candidate Shervin Aazami. Shervin has a bold vision for the future- one that includes transformative change to our systems to meet the needs of the moment we are living in. Not only that, but Shervin has the experience and background to make this vision a reality. As an Iranian American, Shervin knows first-hand that our community is often left out of conversations and policies that directly impact us- but he’s fighting to give Iranian Americans a seat at the table in Congress so that decisions made about us are not made without us. Join us in supporting Shervin Aazami!

Congresswoman Katie Porter (CA-47)
Congresswoman Katie Porter represents one of the largest Iranian American populations of any Congressional district in the country. Since taking office in 2018, she has been a strong advocate for NIAC Action’s legislative priorities by supporting peace and diplomacy first. Due to the redistricting process, Rep. Porter faces a big challenge in her re-election campaign because the majority of voters in her district are now new to her. Help us send this champion of the community back to Congress!

Congresswoman Rashida Tlaib (MI-12)
A leading advocate in the efforts to end and repeal the Muslim Ban, Congresswoman Rashida Tlaib has once again earned the endorsement of NIAC Action. Rep. Tlaib continues to use her national platform to advocate for issues and values in-line with NIAC Action’s mission. She is committed to preventing war with Iran and returning to the JCPOA, and is deserving of our support to win her re-election campaign.

Congresswoman Ilhan Omar (MN-05)
Congresswoman Ilhan Omar is a leading champion on many of NIAC Action’s priorities. She works tirelessly to end inhumane sanctions and is leading the effort to ensure cruel family-separation policies like the Muslim Ban can never be enacted again. Rep. Omar is a member of the No War with Iran Caucus and a vocal advocate for peace in her position on the House Foreign Affairs Committee. We are lucky to have an advocate like Rep. Omar in Congress!

Congressman Tom Malinowski (NJ-07)
In 2018, Congressman Malinowski narrowly won this swing seat in a highly competitive race. In the 2020 election, he barely managed to hang on to his seat as pro-Trump (and pro-war) groups targeted his seat. After another win by slim margins, Rep. Malinowski faces a huge uphill battle in his re-election campaign this year. He is a former State Department official who now sits on the House Foreign Affairs Committee where he has been a vocal advocate against the Muslim Ban and highly in favor of diplomatic efforts to resolve challenges with Iran. Rep. Malinowski continues to show up for our community- now we need to show up for him!

Congresswoman Pramila Jayapal (WA-07)
Congresswoman Pramila Jayapal, co-chair of the Congressional Progressive Caucus, continues to prove her commitment to championing policies that put the most marginalized communities first. When Iranian Americans were detained at the Peace Arch Border Crossing in Washington State in 2020, Rep. Jayapal sprung to action to demand answers and accountability for this discriminatory attack on our community. She supports legislative efforts to prevent war with Iran and advocates for equitable immigration policies– two of NIAC Action’s chief legislative priorities. We are proud to endorse Rep. Jayapal’s re-election campaign! 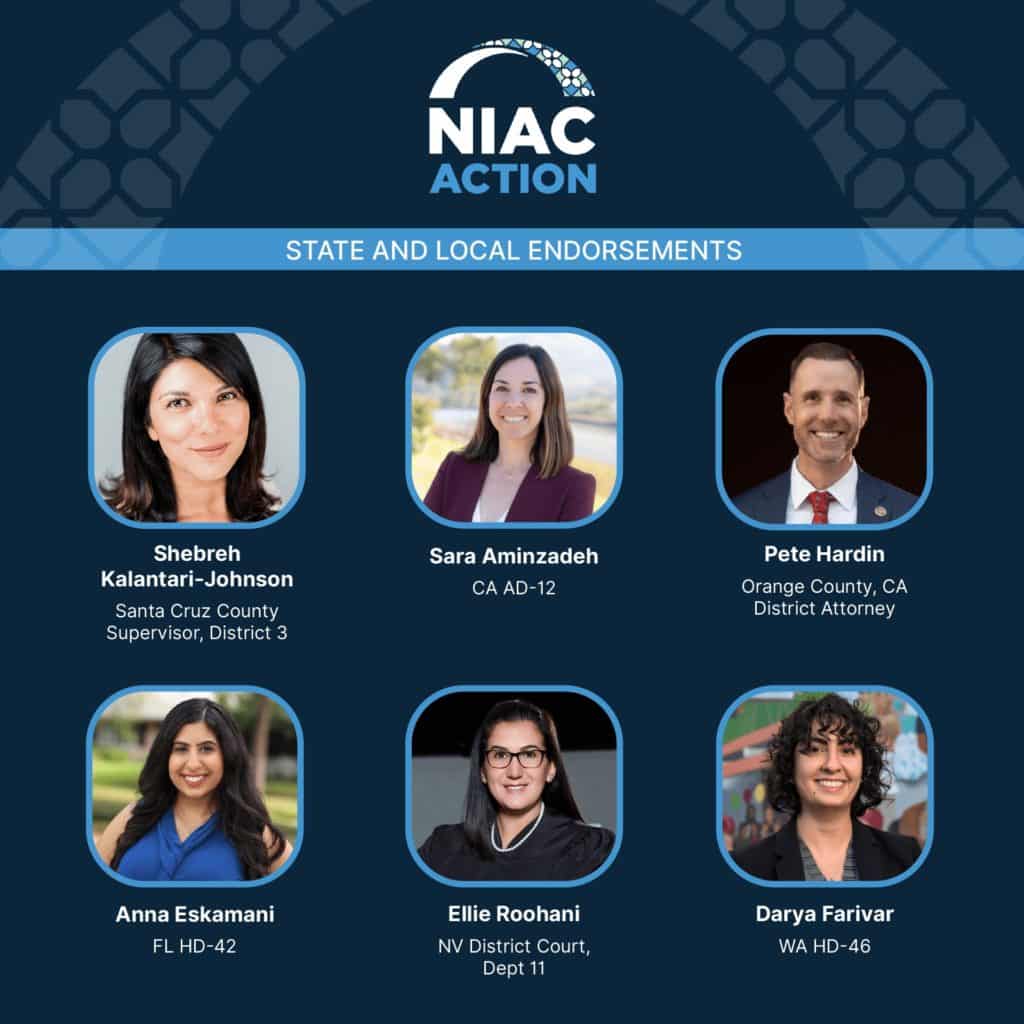 Shebreh Kalantari-Johnson (Santa Cruz County Supervisor, District 3)
After a hugely successful first year on Santa Cruz City Council, Shebreh Kalantari-Johnson is taking her leadership to the next level and running for Santa Cruz County Commission. NIAC Action is proud to endorse Shebreh because we know that she will always prioritize community well-being. As a public health professional, she has put her expertise into action on the Santa Cruz City Council to ensure that resources are available to address the most pressing issues of the area such as affordable housing, dismantling systems that perpetuate racial inequities, wildfire preparedness, and economic recovery. This is the exact type of leadership we need at the County level, and Shebreh is the person to get the job done.

Sara Aminzadeh (CA AD-12)
Sara Aminzadeh is a California Coastal Commissioner, climate champion, working mom, and first-generation Iranian American. Sara has proven the value of her leadership when it comes to tackling major issues affecting our communities, like the climate crisis, serving the state of California for over 20 years through non-profit policy and advocacy work. If elected, Sara would be the first Iranian-American woman to ever sit in the California State Assembly.

Pete Hardin (CA Orange County, District Attorney)
Pete Hardin is running for District Attorney in Orange County, CA– representing one of the largest Iranian-American populations in the entire country. He is a former Judge Advocate with the U.S. Marine Corps, Deputy District Attorney, and Special Assistant United State Attorney. Pete knows how vital it is to combat hate crimes and discrimination that impacts communities like ours. He is committed to working with the Iranian-American community to tackle these systemic issues and ensure the civil rights of all Americans are protected. Join us in supporting Pete’s campaign!

Rep. Anna Eskamani (FL HD-42)
NIAC Action is honored to endorse Rep. Anna Eskamani once more in her re-election campaign to Florida State House, District 42. Rep. Eskamani is one of the first Iranian-American women to ever win elected office, and continues to champion progressive, people-first policies in the Florida legislature. Rep. Eskamani received NIAC’s inaugural “Rising Star” award during her first term in office, and continues to prove how valuable her leadership is in elected office. Her commitment to her constituents, the Iranian-American community, and the people of Florida is unparalleled– help us send Rep. Eskamani back to Tallahassee next year!

Judge Ellie Roohani (NV District Court, Dept 11)
Judge Ellie Roohani was appointed to the Nevada District Court by the Governor of Nevada last year in a competitive appointment process- preserving ahead of 13 other candidates to demonstrate that she is the best person for the job. The daughter of Iranian-American immigrants, she has dedicated her career to public service and excelled in every role she’s served in. Judge Roohani is now seeking re-election to retain her seat on the District Court and continue serving the people of Nevada with the fairness and integrity they deserve.

Darya Farivar (WA HD-46)
First-time candidate and Iranian-American woman Darya Farivar is running to serve in the Washington State legislature. Darya’s history of service is impressive– she works of the Director of Public Policy at Disability Rights Washington, serves as the Co-Chair of the Seattle Women’s Commission, is the Policy Chair on the State’s Special Education Advisory Council, and is a Board Member of Peyvand, an organization supporting Iranian students at the University of Washington. If elected, Darya will become the first Middle Eastern woman to ever serve in the Washington State legislature. She faces a competitive primary race for this open seat, so chip in today to help Darya get over the finish line!