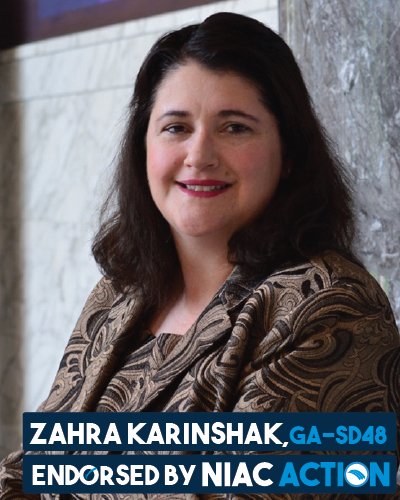 Karinshak, whose father immigrated from Iran, pledges that she “will advocate for policies that promote the well being of all residents, with a particular eye on defending the rights of immigrants and those currently without voices.” She plans to fight back against discriminatory state bills in Georgia such as the “English only” legislation that targets immigrants.

She also supports the JCPOA and opposes broad sanctions that punish ordinary Iranians. “As a military veteran, I have a great appreciation for what it takes to maintain peace and order in the world.  It is important for other nations to know that the United States keeps its word. It is also important that the United States maintain its commitment to international peace and security by working with international partners and allies,” wrote Karinshak.

“My two daughters inspired me to run. During the 2016 election, they observed that ‘no one is being kind to each other and you, mom, have to do something to bring us together.’ They are right,” added Karinshak.

Zahra is running as a Democrat in a State Senate district that is currently held by a Republican who has not been challenged for fourteen years. The district voted for Hillary over Trump by 6 points and is now an open seat, giving Zahra excellent odds to bring change to this seat and make history for our community.