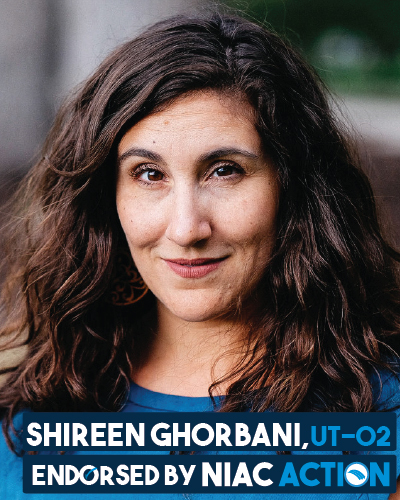 NIAC Action is proud to endorse Shireen Ghorbani as the next representative of Utah’s 2nd Congressional district. If elected, Shireen would become the first Iranian American in Congress, which she hopes will “start a movement for more people with deeper roots to the community to have a seat at the table.” A proud first-generation Iranian American, Ghorbani is “particularly distressed by the the Muslim ban,” because “under this ban, families like my own are kept apart.” If elected, Shireen will “support Congressional efforts to defund and rescind the Muslim ban,” including the Statue of Liberty Values Act that has been introduced in the House of Representatives. Shireen believes that “this ban is misguided and harmful” with “no evidence that it makes us any safer.”

On foreign policy, Shireen says she feels considerably less safe with the current president’s “saber-rattling” without a broader plan. She also suggests Trump’s actions toward Iran are “distractions for a series of failed policies and scandals plaguing the administration.”

Hailing from outside of Bismarck, North Dakota, Shireen earned her Bachelor of Arts in Theatre and Communication Studies in 2013 from St. Cloud State University. Shireen and her fiancé spent two years serving in the United States Peace Corps in the Republic of Moldova, an experience that has helped shape her campaign.

Ghorbani’s campaign is focused on building grassroots support and Shireen is refusing any corporate donations.  Instead, she is focused on an “aggressive ground game” to propel her to victory.

Ghorbani’s positive agenda stands in sharp contrast to her Republican incumbent Chris Stewart this November. Stewart has defended the Muslim ban as “appropriate” and done nothing to rein in Trump or conduct oversight over the ban’s implementation. Moreover, Stewart cheered Trump’s withdrawal from the Iran nuclear agreement and escalation of tensions that could lead to war.

Help make Shireen the first Iranian-American in the U.S. Congress!