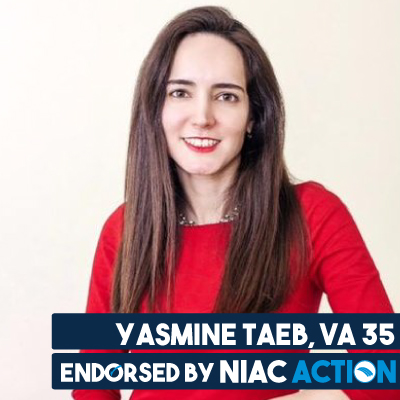 “Yasmine has been on the front lines standing up for the Iranian-American community and against the bigotry that Trump rode to the White House. We are proud to have worked with her, and are thrilled to endorse her candidacy for State Senate today,” said Jamal Abdi, President of NIAC Action. “Whether leading marches against the Muslim ban, advocating for human rights, or blazing a trail at the DNC, Yasmine has the leadership and vision to give the 35th Senate district of Virginia a champion of its values and to make our community proud.”

Yasmine’s dedication to championing progressive values is a result of her own origins. At the age of six, she fled Iran with her family to escape the Iran-Iraq war. Being an Iranian-American immigrant has afforded her a unique, nuanced understanding of the needs of underrepresented groups. As a longtime Northern Virginia resident, Yasmine has worked diligently to highlight women’s issues and to eliminate unlawful discrimination. Her experience has emboldened her to advocate for the same marginalized communities regressive politicians like Northam and Saslaw have abandoned.

Yasmine Taeb has joined other Virginia Democrats in calling for Governor Ralph Northam to resign after shocking photos emerged showing the governor in racist attire. Yasmine’s opponent, Dick Saslaw, was the only Democrat in the General Assembly to defend Northam, and characterized the outrageous photos as a mere youthful indiscretion. Saslaw’s attempt to excuse this behavior underscores the importance of bringing new leadership to Richmond.

As a lifelong activist committed to amplifying the voices of those frequently sidelined and marginalized by regressive politicians, Yasmine will stand firmly against the bigotry driving today’s politics. Yasmine serves as Senior Policy Counsel at the Center for Victims of Torture and has dedicated her career to public advocacy and service, including serving as a 2012 NIAC Congressional Fellow. Yasmine has been endorsed by more than 50 community leaders and local elected officials, including by the leaders of Indivisible, MoveOn, PCCC, and Demand Progress and by progressive groups such as the Progressive Democrats of America – VA, Our Revolution Northern Virginia, and Emgage PAC.