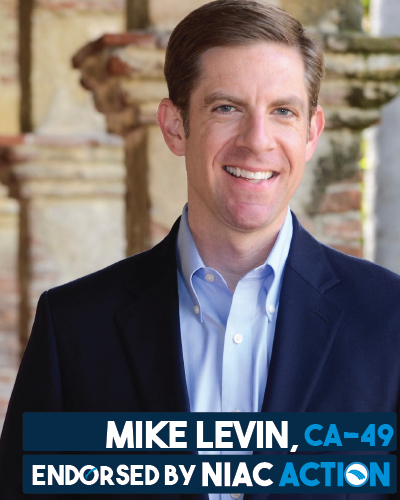 NIAC Action is proud to endorse Mike Levin in his campaign to become the next Representative of California’s 49th Congressional district. Levin is a staunch opponent of the Muslim Ban which he views as a “false solution based on hysteria.” He supports the Iran nuclear deal and has warned that the U.S. effort to abrogate the accord is “a precipitous and ineffectual gesture” that threatens to “undermine American credibility throughout the world.”

Levin believes in treating immigrants with dignity and wants to “preserve the values and aspirations of so many immigrants like my grandparents, who dream of the uniquely American opportunity for self-improvement.” He is deeply critical of Congress’s failure to debate or hold hearings on the Trump’s Muslim ban, noting that the “Republican-led House convened a task force to evaluate terrorist threats from abroad prior to Trump’s election and did not find that nationals from Trump’s ‘banned’ list posed a threat.”

Levin is supportive of diplomatic engagement to resolve challenges regarding Iran. According to Levin, “the United States’ role and relevance can only be maintained through continued efforts to engage in constructive negotiations. The US must be willing to recognize and reward forward steps through diplomatic efforts.” While he supports sanctions under some circumstances, he recognizes that unilateral sanctions are not effective and instead “international consensus and joint action are necessary.”

Public education is very important to Levin and he will “advocate for our local public schools to get the resources they need to hire and keep excellent teachers, reduce class sizes, and invest in Science, Technology, Engineering and Math (STEM) programs.”  He will also push to “eliminate tuition and fees at public four-year colleges and universities for students from families that make up to $125,000 per year, and would make community college tuition-free for all income levels.”

The 49th district has been represented since 2003 by Darrell Issa, a retiring Republican lawmaker whose platform has contradicted many of the Iranian-American community’s expressed priorities. It is critical to elect a Mike Levin, a representative who will finally take the concerns of the community seriously.