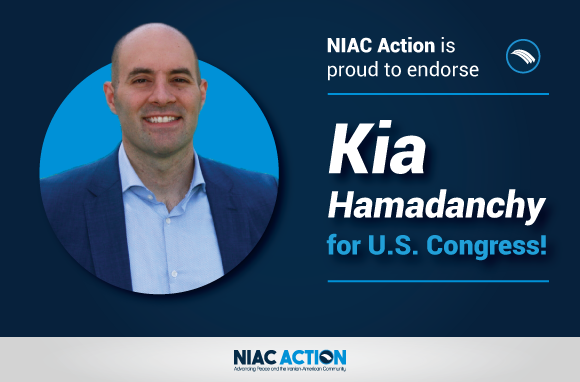 Do you remember where you were on the night Trump first imposed his ban against Iranians?

Kia Hamadanchy was working in the U.S. Senate. As he saw the nightmare unfold, he decided that enough was enough – we needed an Iranian American in Congress. That’s when he made up his mind to run for U.S. Congress to represent his hometown of Irvine, CA.

Kia is running in California’s 45th district – which has the second largest Iranian-American population of any district in the country. The incumbent is a Tea Party Republican who is in lockstep with Donald Trump. Like too many lawmakers, she ignores her Iranian-American constituents on core issues like Trump’s ban and preventing war with Iran.

What better message to deliver to Washington than sending the first Iranian American to Congress?

NIAC Action is proud to announce our endorsement of Kia Hamadanchy for Congress because he stands firmly on the right side of the issues most important to our community: he has pledged to work to dismantle Trump’s shameful Muslim ban; he is an unapologetic defender of the Iran deal who supports diplomacy over war and sanctions; and he wants to foster greater ties between the American and Iranian people.

Already, Kia raised an impressive $200,000 in his first quarter. But he faces a crowded primary election and a tough battle in the 2018 general election. It is imperative that our community unite in support of his candidacy so we can finally have a pro-peace, civil rights champion representing the Iranian-American community in Congress.

To get the latest updates on Kia’s campaign and find out how you can help, visit his website at www.kiafororangecounty.com.

If you would like to contribute to Kia’s campaign you can make a donation here.