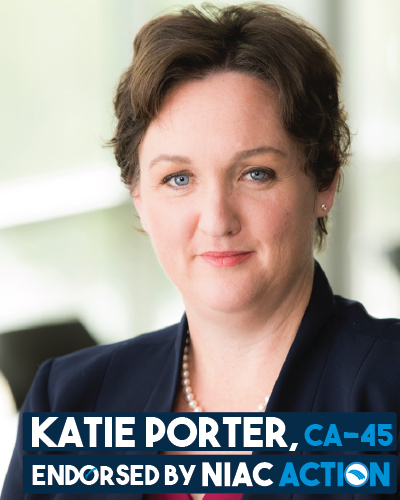 NIAC Action is proud to endorse Katie Porter in her campaign to become the next Representative of California’s 45th Congressional district. For the Iranian-American community, Porter’s strong opposition to Trump’s Muslim ban and commitment to overturn the discriminatory order is a sharp contrast to the incumbent, Mimi Walters – who has been a rubber-stamp for Trump’s policies. Moreover, Porter supports the Iran nuclear deal struck under President Obama as an alternative to war and will oppose efforts to destroy the vital diplomatic accord. With so much at stake, the Iranian-American community needs a fighter like Porter in Congress. Porter argues that the ban was “created to enshrine discrimination into immigration policy.” As a representative in Congress, she will highlight the toll of the Muslim ban on families in her district and “fight for judges and a justice system that recognizes the unconstitutionality of discrimination.” On foreign policy, while working to protect the deal, she will support dialogue between the two countries and seek to “hold the regime to international human rights norms.” Critically, Porter notes that broad-based economic sanctions “have only served to strengthen regimes hand by depriving citizens of their ability to make a living.”

Porter brings a wealth of experience fighting entrenched interests via her experience as a Consumer Protection Attorney, including by “taking on Wall Street banks and powerful financial institutions who cheat middle-class families.” Given this experience and her strong knowledge of the Iranian-American community’s hopes and fears, we believe she will help ensure that the 45th District of California – home to so many Iranian Americans targeted by Trump’s policies – finally has representation that holds the President accountable.