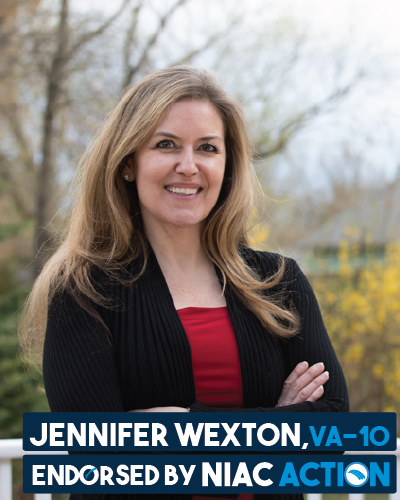 NIAC Action is excited to endorse Jennifer Wexton as the next U.S. Representative of Virginia’s 10th District. Wexton has proven that she is a fierce opponent of Donald Trump’s unconscionable Muslim ban and was among the first elected officials to protest the ban at Dulles Airport in Virginia. Wexton is also a strong supporter of the nuclear accord with Iran, which she described as a “a triumph for peaceful diplomacy as a means to settle international conflict and avoid war.” As a Member of Congress, she would be a strong fighter for the priorities of her district, including its large Iranian-American community. In contrast, the incumbent Barbara Comstock has done nothing to rein in Trump’s ban on so many families in Virginia-10 and commended President Trump for withdrawing from the Iran nuclear deal and snapping back sanctions that punish ordinary Iranians. Comstock even hosted a fundraiser with John Bolton, now Donald Trump’s National Security Advisor, who has repeatedly called for bombing Iran and who has accepted tens of thousands of dollars as a from the Mujahedin-e-Khalq cult while it was still designated a terrorist organization.

With Trump’s ban continuing to separate Iranian families and the drumbeat of war getting louder, the Iranian-American community needs a champion like Wexton on Capitol Hill. Wexton describes the ban as “not only unconstitutional, but racist, ineffective, and a hazard for our national security.” In Congress, Wexton “will vote against any form of the Muslim ban and any other similar discriminatory policies,” and use her platform to speak out against it just like she has done as a State Senator.

On foreign policy, Wexton will work to support the Iran nuclear deal and oppose legislation that seeks to undermine it, including new sanctions that risk impacting the deal. Wexton notes that “sanctions tend to harm civil society and common people as much if not more than they influence the regime to change its policies,” and that “the negative effects of sanctions must be weighed very heavily and considered very closely.”

Wexton has been a committed public servant throughout her career, including as a prosecutor, substitute judge, an attorney for at-risk children, and a State Senator. She was inspired to run for State Senate based on what she saw as a radical Republican agenda on social issues, and is now running for Congress because she is “concerned about the damage that can be done to our country and our Democracy by President Trump and the extreme Republican party that enables him.”