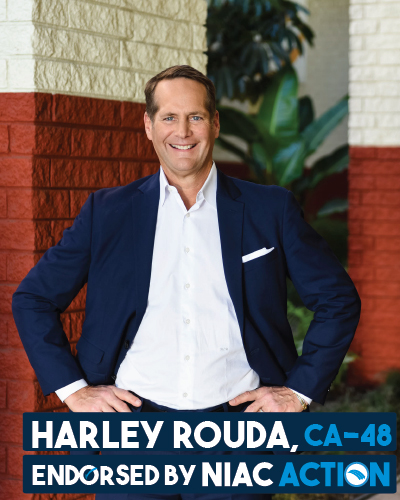 NIAC Action is proud to endorse Harley Rouda as the next Congressman of California’s 48th Congressional district. Rouda opposes “Donald Trump’s backward attacks on immigrants” and is ready to work in Congress to end the Muslim Ban. He is also committed to supporting the Joint Comprehensive Plan of Action (JCPOA) and America’s commitment to peace and stability abroad. Rouda describes Trump’s efforts to undermine the nuclear accord as “wrong, dangerous and unfair.” He says that the U.S. “must negotiate in good faith and that includes supporting the JCPOA.” There is a lot at stake for the Iranian-American community in Rouda’s race given the incumbent he is seeking to replace – Dana Rohrabacher. In response to ISIS terror attacks on Tehran in 2017 that killed innocent civilians, Rohrabacher called the attacks “a good thing.” As Rouda has pointed out, Rohrabacher has failed to fully and sincerely apologize for the remarks.

Moreover, Rohrabacher has openly called for supporting violent ethnic separatists in Iran as well as the Mujahedin-e-Khalq cult group that was designated as a terrorist organization until 2011. Rohrabacher has refused to condemn President Trump’s Muslim ban or even hold a hearing on it, despite his perch on the House Foreign Affairs Committee that oversees the State Department.

Harley Rouda has long been dedicated to protecting the humanity of people in his community. Along with his wife Kaira, he worked to established the first homeless shelter for families in Columbus, Ohio and is a long-time supporter of Human Rights Watch, Planned Parenthood, and the Human Rights Campaign. Rouda also advocates for comprehensive immigration reform that includes reversing the Muslim ban and supporting student visas.

Rouda believes that “Donald Trump and his enablers, including Dana Rohrabacher, are moving our country backwards.” You can help him reverse Trump’s damage and put the country back on a path that benefits all Americans.