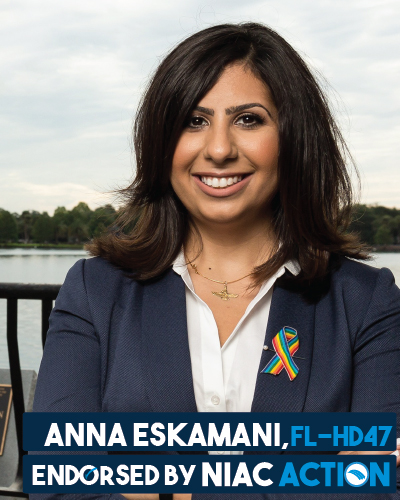 We’re Proud to Endorse Anna Eskamani for the Florida House

We’re excited to announce our endorsement of Anna Eskamani, who is running for the Florida House in District 47 and would become the first Iranian American ever elected to the Florida legislature! Anna currently serves as the Senior Director of Public Affairs and Communications for Planned Parenthood and is an adjunct professor at the University of Central Florida, where she is completing her PhD in public affairs.

“I grew up in a working class family as a first generation Iranian-American,” Anna tells us. “Tough comes from struggle, and I have lived through struggle.”

She is the daughter of Iranian immigrants – her mom was born in Tehran, her dad in Tabriz, and they met in Orlando. “My first trip to Iran was to bring my mom’s ashes to the Caspian Sea, as she passed away in 2004 from cancer,” she says.

Her connections to the Iranian-American community, and the issues that affect us, run deep – she has organized activists locally against Trump’s Muslim ban and is a supporter of the Iran deal.

Recently, Anna was featured on the cover of Time magazine as one of the many inspiring women running for office this year. “I have served as a community advocate for nearly ten years,” Anna says. “I made the decision after the 2016 elections that it was time for women like me to step up, and pave the way for a new generation of elected officials who are community-driven and people focused.”

The Florida House has come under the spotlight recently after it voted down a proposed ban on guns like the one used in the school shooting in Parkland, Florida, that claimed 17 lives. Anna knows the issue well – the district she is running to represent in the House includes the location of the 2016 Orlando nightclub shooting that was, at the time, the worst mass shooting in U.S. history. The event prompted Anna to become a founding member of the Florida Coalition to Prevent Gun Violence.

Florida House District 47 is an open seat that has been held by both Democrats and Republicans in recent years. She is the only Democrat in the race and faces two Republican candidates. With our community’s support, we can help send her to the Florida legislature this November.

>> Make a contribution to Anna’s campaign